Getting an Early Start on Christmas

The kitten seems mesmerized by the new tree. 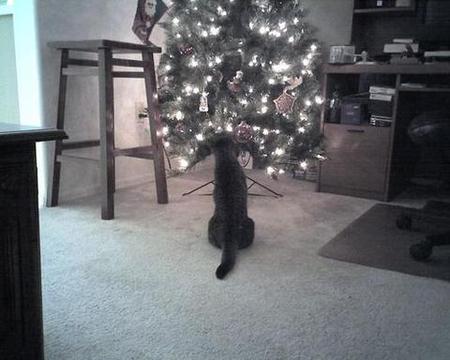 Will she leave it alone? 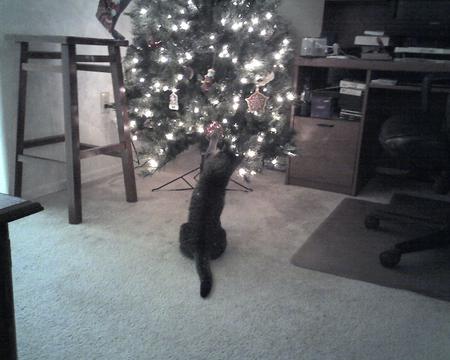 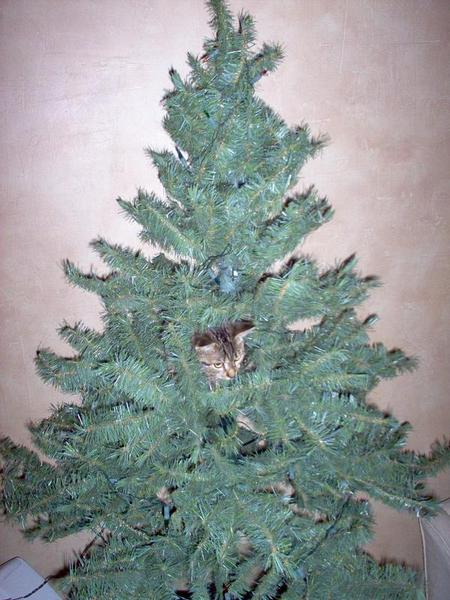 Do you have The Knack?

Contradictions, False Assumptions, and The Sword of Truth Finale

I'm agnostic, so two groups that really tend to get on my nerves are religious firebrands and evangelical atheists.

The events of the last few years seem to have caused Goodkind to blend the early socialist/communist ideals of the Fellowship of Order (his corporeal bad guys) with the death-cult mentality of Militant Islam.

I've already written about Goodkind's distinct distaste for socialism/communism, but in his last book (and an epic case of target drift), <hyperbole>he's decided to lump in anyone who isn't a God-hating atheist in with the rest of the commie scum.</hyperbole> I don't think he was paying enough attention to potential contradictions and false assumptions when he was putting the end together.

I've never understood why it is that some atheists feel they must become anti-theist.

I've argued against that point, myself.

There was a time back in high school where I developed a bit of an anti-theist streak. I think it had a lot to do with the experience I had with my neighbors I mentioned in your comments a while back. Since, then, I've mellowed quite a bit.

I'd like to think there's something out there waiting for us, and that if we're simply good to each other, we'll be welcomed warmly when our time comes. Then again, I'm not about to believe that that same something has decided I can only eat X, Y, and Z on days starting with T as a sign of my faith.

(aw damnit... I just realized I misspelled atheist all over the place... time to fix that...(and Sky Daddy can have my vulgarity when he prize it from my cold dead hands))

I used to be "anti-theist", in my younger days, like 10-15 years ago.  Over time, I came to realize that while I had my own belief system, I had no idea if it was right.

Nowadays, while I'm still not a believer in any sort of higher power at all (save the Big Bang and the Gnab Gib), I no longer look down my bill at those who do.  If it works for them, great... and they might be right.

4 That's basically been my attitude for a while. We'll al find out who's right eventually, so why really bother? If there's really any there there, I think my immortal soul will be ok. If there isn't any there there, then we're all screwed.

Well, I'd Call That A Moment In Time

I don't think of the Grand Canyon Airport as being particularly busy, which makes this image all the more rare.

I'm posting this from my brand-spanky new computer.

This build took signifcantly less time than my previous two builds. A) because I had a better feel for what I wanted to achieve, and 2) because I had enough money built up to get all the parts in a short amount of time.

Wireless keyboard and mouse (The keyboard's a little touchy, or not actually. You have to fully depress the key to get a reading. The keyboard I'm used to is much more forgiving.)

All in all I clocked in at about $1200, which seems reasonable for what I've got. (1200 includes a new copy of Windows XP. I can upgrade to Vista later. I'm always a very late adopter when it comes to an OS.)

Now I don't have an excuse to pick up some newer games.

My wallet is screaming in pain.

1 New toys are fun, aren't they? Sounds like you got a good one for the price.

I have a lot of fun just putting everything together. I tend to be very hands-on. It's wrangling with the software that drives me nuts.

My new machine has Wi-Fi native on the motherboard. I've managed to get into my network through the wireless and get an internet connection, but I cannot for the life of me get my two desktops (the other is wired into the router) to see one-another. I'm sure there's some stupid checkbox I'm missing somewhere. I've synced up workgroup names and set up shared drives on both machines. The wired desktop sees the wireless desktop in the "computers near me" window, but as soon as I try and connect, it says the computer can't be found. The wireless desktop can't see anything other than the internet.

And of course, I can't find the software that came with my router that may or may not be of help.

3 I did that a couple of times, but I don't have the energy any more.

If I thought I could make a living of it, I wouldn't have a problem building custom machines for people, but this networking nightmare is certainly sapping my reserves. I had the wired machine browsing the hard drive of the new machine a second ago, but I still can't browse the other direction.

How have I not heard about Band of Bloggers yet? Right now, I'm watching the tail-end of a show on History Channel called Band of Bloggers. How is it I haven't heard about this show yet? I follow enough blogs that I should have seen something... Was I just asleep at the wheel?

I could just sit and watch (listen to, really) these all day.

Oblivious male leads and hyper-shy female leads are a staple of anime. No genre is immune.

In a harem genre full of mediocre titles, the number of males capable of detecting and acting on the interests of a member of the opposite sex (rather than freaking out if/when they finally get the hint) is vanishingly small.

But never fear, Mao-neechan is here!

(It get's a little picture heavy below the fold)

I should have kept a screenshot.

Flash Portal So... Lots of people have been yakking it up about Portal. Well, while the Orange Box is definitely in my future, for now a flash version of Portal will have to suffice.