I wonder when that happened...

When I comment in Minx from work, the ip hash always comes back as "sox9v", and from home it was always "ols40". Now my home ip is generating a different hash. I can't think of anything that would cause/require my home ip to change. From what I understood, the ip on a cable connection should be static.

It's not any big deal, just unexpected.

1 Actually, on most cable systems the IPs don't change very often, but they do change once in a while. Why, and how often, is one of the mysteries of life, but to get a permanent IP that they guarantee won't change, you have to pay a monthly fee.

At least it sucks when you're shopping in a real estate market that's suffering the aftershocks of hyper inflation.

Four years ago you could have got yourself into a nearly-new suburban track-home for under 200k. Then the market went on a bat-shit crazy binge for a couple years.

At the height of the boom, you'd be in a bidding war for that same house for all of 15 minutes before it sold to some jackass investor out of LA for 310k. They all expected to sit on the property for a month or two, maybe a year, and flip it for another 50k or more. The bubble burst and now there's a couple dozen foreclosures a week because people bought up property they couldn't afford long-term.

All these newly bank-owned properties are flooding the market, but the banks being what they are, refuse to loose money on these deals. Houses that should rightfully be below 200k are still being held up by stubborn banks for what's still owed on them. (In one case in particular, I saw a bank list a pretty rundown house on the MLS at price of 210k, but finally dropped it to 180k.They rejected three offers for that lower price, then promptly jacked the price back up $12,000.) In the mean time, interest rates took off in May and June and haven't really relaxed.

When I decided it was time to get myself into a house back in March, things didn't look so bad. Interest rates were ok, but the prices hadn't yet dropped into my wheel-house. It may just be my perception, but prices seem to have flattened right about the time the interest rates bumped.

In the mean time, I allowed the lease on my apartment to expire and convert to month-to-month. I didn't plan on this taking so damned long. So I'm paying pretty close to what a cheap mortgage would be as it is.

Speculating investors and realtors have fucking destroyed the AZ real estate market, screwing those of us who actually want to live and work here.

1 One of the (few) advantages of living in Houston is that the speculators never got around to here. You can get a brand new 5-bedroom house inside the Beltway for $125k...

Back in early April I was in Dallas (actually, we stayed in Justin, a stone's throw from the track) for the NASCAR race, and while we were there, a family friend who had recently moved inot the area showed us around to some of the places for sale. You could get a decent 1500 sq ft house on acreage for around $200k.

Here in Phoenix, the smallest new track homes on the dinkiest lots in the absolute outer fringe are still around $130k. I really don't know if our market will ever readjust to where it should be.

The Secret to Enjoying Las Vegas?

The best way to make a trip to Vegas almost miserable?

At least the hotel was nice. 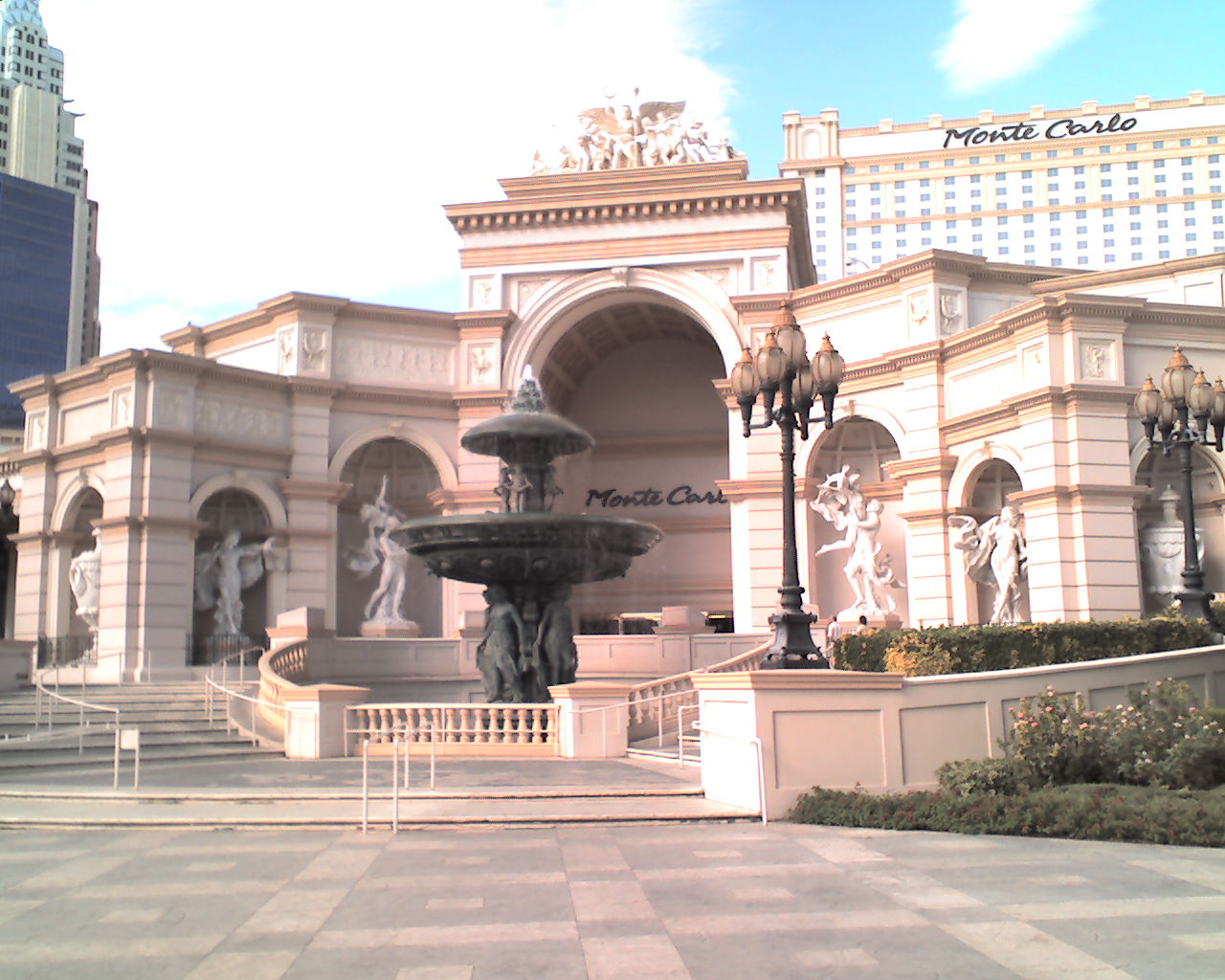 Don't adjust your screen. We weren't actually on Mars. The camera in my very expensive cellphone just sucks that much. Between the poor resolution and the retarded automatic color correction, I hardly bother with using the camera function anymore.

And the amount of City Center construction going on along the Strip is absolutely ridiculous. If you were to turn 90º to the right from the picture above, you would see a massive hole in the earth from which burst a rectangular beast of steel, concrete, and wiring. We had the misfortune of being placed in rooms that faced the new iron monstrosity, and the construction had all of us up far too early on Saturday morning.

So, there's a Vegas trip coming up in my distant future. I hit Google Maps to figure out how to get to the hotel when what did I see in the satellite view but this odd looking set of buildings. From closer to the ground you get an entirely different view (and a hefty price tag).

It's called Turnberry Place, and whoever assembled the overhead shot for Google's database managed to turn four fairly normal highrises into a Dali-esqe image of leaning towers and nonsensical shadows. Though, it would be more fun to live in that way.

1 That is certainly peculiar looking, and it seems to have been done on purpose. I can't imagine why, but if you compare it to some of the high-rise hotels nearby it's clear that the camera angle on those four buildings not only don't match each other, they don't match anything else, either.

2 When I went looking for ground level images of those towers, the vast majority were promotional renders or construction photos, so they must be fairly new builds. You suppose Google has an outfit doing aerial photography to patch up outdated areas of interest in their imagery? That may explain how they don't match up with any of the other local buildings.

You'd think they'd redo an entire area all at once, though. And it's hard to believe that they couldn't fit all four of those buildings into a single frame, given that they do their photography from high altitude.

I'd love to know what the real story is, but I suspect we'll never find out.

Now that was unexpected.

Xenoglossia is turning out to be far better than it has any right to be. The betrayal staged in episodes 17 and 18 was particularly well constructed, and it made me both angry and not a little bit amazed at the character's ability to stay so inconspicuous (and dedicated as well).

There's still so much left unexplained that it's hard to guess where the plot is going, but I don't get the feeling they're going to pull any Eva style metaphysical nonsense, so it's at least got that going for it.

You hear me? The last straw!

It's time to join Ducks Unlimited!

A pucker factor of 9 about sums it up

I can't imagine how you would even practice a landing at this airport.

Whatever they're paying that guy, it doesn't seem enough.

1 How's he planning on taking off again?  That doesn't look like nearly enough runway to get that thing off the ground.  What is it, like five or six hundred yards?

Good question. With only a partial fuel/passenger load, a running start from the taxiway, a little extra take-off flaps, and a whole lot of pull on the yoke, I think he can at least get off the ground in that distance.

The airport in Sedona, Arizona has the almost opposite problem. The ground drops away quickly from each end of the runway, and it's not very long. The biggest thing I've seen in there was a three-engine business jet. The large cliffs a short distance to the east don't help.

3 Geezus, I don't think they're paying THE PASSENGERS enough.

I could be wrong, but that looks like the runway 01 approach for Toncontin International in Tagucigalpa, Honduras.  The 757 is the largest airliner that can land there, and the airport is in a "bowl" made of mountains.  Here's what it's like to fly on that approach as a passenger in an Airbus 320

The runway is only 6132 feet long.  In contrast, the shortest runway at Atlanta Hartsfield is 9000 feet and has no obstructions anywhere near the end of the runway.

6 I'll fix it if/when Pixy activates comment editing. The WYSIWYG editor can be trying at times.

Terry Goodkind Hates Pinko Commie Leftist Bastards and He Thinks You Should Too.

And he's not above bludgeoning you over the head with that for an entire novel either.

Or words to that effect.

A friend loaned me the first 8 books of the Sword of Truth, and while I was having some serious Robert Jordan deja vu for the first two books, once he set his teeth into the conflict with the Order, I began to finally feel like I was in new territory.

Then he decides he's gonna turn modern-day George Orwell for a novel. And while I agree with the sentiment, it's the ham-fisted execution that had me groaning every couple pages.

Hopefully he got it out of his system. Pillars of Creation has started out pretty slow, but it's interesting to see that he brought back Chekov's Siblings.