Could this Airstrip be any more Isolated? I'm back to wandering through Google maps, checking out whatever corner of the map intrigues me at the moment.

So I got to thinking about an old nature show describing the way the Hawaiian island chain is the result of a tectonic plate drifting over a hot spot in the mantle. Google long ago added sonar maps of the sea floor to their offerings. Today I just got to wandering along the submerged chain that never quite broke free of the surface when I panned across this. 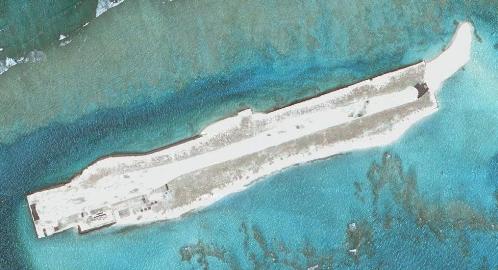 Now the existence of that airstrip is going to bother me until I figure out when they decided to scrape up enough mud to break the surface, and what it was used for.

1 Looks like we are going to end up almost exactly 1/2 way between Uncle Steve and Uncle Will - around Sossman and Baseline. Not totally nailed down yet, but it looks good. Once the new TV is delivered we are going to have to fire up Anime night again!

2 Sweet. You'll also only be a couple miles south of Boomer and Kristen.

There's a lot of shopping close at hand there as well, so that will be convenient.

Any idea on a time frame?

3 Heh.  French Frigate Shoals was used during WWII by both the Japanese and the US as a good place to operate flying boats from.  The second attack on Pearl Harbor came from there, in fact.

4 Well, it was interesting reading up on such a remote location. These are the kinds of places I'd like to see in my lifetime. It's a shame the criteria for getting out there are so restrictive.

5 Dude - where did all the blogging go?

6 Just no inspiration. Any good Youtube videos are pulled minutes after you link them. Iran could nuke DC right now, and I'm not sure I could muster a half-hearted "meh." I haven't watch a single new anime show in over a year, and work is actually beyond hopping right now. Blogging would be a chore right now.